You can apply the Moeller technique to most of the 40 essential drum rudiments. However, there are some rudiments that lend themselves very well to a natural Moeller movement, and can be played moeller-esque without even thinking about the technique. Lesson 25 is one of those rudiments.

In the above video I’m playing the Lesson 25 rudiment as notated with the Moeller strokes below, but at the same time I’m playing what is natural for my body movements.

I recently purchased the Fostex AR-4i audio interface for my iPhone 4s. Even though it came out a few years ago it still had the best reviews for a recording interface in it’s price range.  I wanted something under $100 that’s really quick to set up and portable so I can take iPhone video recordings of myself and my drum students. 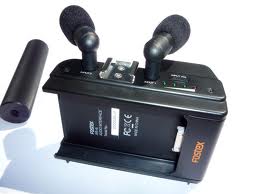 Basically, it’s a mini-interface that attaches to the iPhone 4 or 4s. (They make a similar model for iPhone 5-see link below.) The interface is also an iPhone doc connecter with built-in AD/DA converters and three 1/8″ mic jacks (only two can be used simultaneously for either horizontal or vertical orientation). It also has some nice features including:

It also comes with a nifty grip handle, but since I already own a mini tripod stand I don’t have a use for it. There is a free app you can download from the app store which gives you the ability to set some recording parameters including input mode (mono or stereo), low cut filter, limiter, and clipping reducer. Once I started recording the drums, it took me a good amount of time to find the correct input level where the drums were not distorting. Although, to be honest, my drum space is currently much too acoustically live sounding to get any decent recording.

Anyway, without further ado here is the clip of playing with the built-in iPhone mic:

Here is the take with the Fostex AR-4i:

If you listen to the clips with a pair of decent headphones you can hear that the AR-4i mic captures more low-end and slightly less white noise than the built-in iPhone mic. Also, the cymbals sound more like cymbals with the AR-4i, as the mic captures more of their tonal characteristics. Overall, I’m quite pleased with the results; however, I do prefer the compressed snare sound with the iPhone mic over the the cleaner snare sound of the AR-4i. Amazon had the best price when I bought it. You can purchase it from Amazon here: Fostex AR-4i Audio Interface for iPhone 4/4S/iPod Touch 4G, Battery Powered

If you have an iPhone 5 you can get a similar model here: Fostex AR101 USB Powered Audio Interface for iPhone 4/4S/5, DSLR Camera, and PC

I originally learned Moeller playing matched grip and without forearm rotation. After playing professionally for a few years I developed tendonitis in my right shoulder due to overusing muscles in arms and shoulders while playing at high volumes.

I revisited my technique and developed the Moeller with forearm rotation as well as focusing on just the wrists and forearms to create the whip. My wrists and forearms got stronger and I was able to produce the same high volume sounds without the stress in my shoulder joints. This helped alleviate my discomfort.

If your experiencing any overuse issues it might be useful to develop your Moeller with forearm rotation. However, more importantly is to play relaxed without holding any tension in your neck and shoulders.

I’ll be playing with Chuck Ousley and Quintet this Friday and Saturday night 5/17 and 5/18 in Orange, CA. Here is a short clip from the last time I played with the band in April (sorry about the video shake in the beginning). If your in the area come down and say hello!