Changing Modes CD release show “In Flight”- Arlene’s Grocery Friday April 13th 8:30p
I’m very excited about this special CD release show! I’ve been working with Changing Modes since 2004 and this will be the band’s fifth full length album and the third album I’ve co-produced with my mates.

Here’s a short video of Cell to Cell from the last show we did at Arlene’s Grocery, NYC.

If your looking to learn Reason basics you might like to check out my beginner lessons on Youtube. Reason is a great music software program that emulates a “real” rack of electronic music devices. The first lesson covers the basic Reason 3.0 interface, adding devices to the rack, and customizing Redrum track connections. Lesson 2 covers basic beat programming and lesson 3 covers adding a keyboard bass and putting it all together. 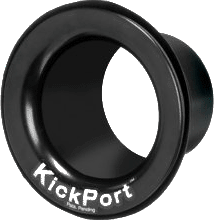 a try. For those of you not familiar with the KickPort, it’s a small plastic tube that gets inserted into the kick drum’s resonant head. Attached to the tube is a rubber flap that is used to seal the KickPort once it’s inserted. It’s claim to fame is that it boosts the kick drum in the same manner as a bass reflex speaker cabinet boosts low frequencies.

I decided to go to Guitar Center to pick one up. It comes with a 5 and 1/4 reinforcement ring; however, I was told that it works better if you cut a 5″ diameter hole instead. 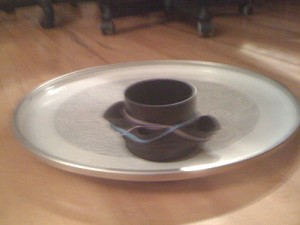 My resonant head had no port, so I decided to make the 5″ hole for the kickport. I have to admit, it made the process a little challenging since the kickport itself is almost 5″ in diameter. I had to remove the resonant head from the drum and place heavy duty rubber bands around the cumbersome rubber flap of the KickPort in order to nudge it into place. The 5″ hole creates a really tight fit for the Kickport, which gives it solid stability.

Using my iPhone, I did a lofi recording with and without the Kickport using the same resonant head.

Here is the audio using a REMO Emperor coated resonant head with a 5 and 1/4″ hole without the KickPort :

And here is the audio using REMO Emperor resonant head with a 5″ hole and KickPort:

You can hear the KickPort takes away some boom and adds punch and low end.

The only downside is that I don’t hear as much tone as before. KickPort’s documentation states that it increases tone, while other websites are stating that different resonant heads yield different results. If you want to know more, check out the blog post from recordinghacks.com.

I think the KickPort has a solid look. Artist and fellow Changing Modes bandmate Grace Pulliam did a fine job painting the 20″ head shown below -I have to admit, the KickPort fits right in:). 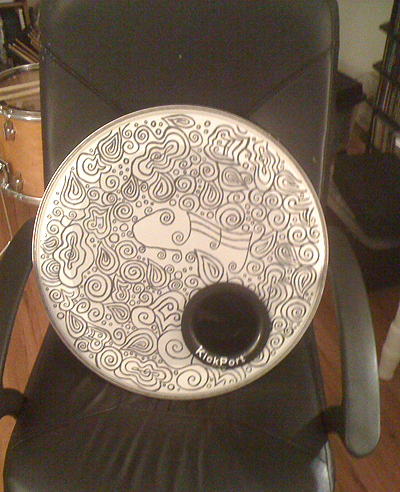 Last summer I trekked up to the Connecticut woods with Changing Modes for the Cell to Cell video shoot. The band had a ball making the video and everyone was really happy with the final product. Special thanks to Paul Rondeau for the concept, location, and the direction of the video. I have to admit, robot-drumming was more challenging than I anticipated. I got together with Grace from Changing Modes, and her boyfriend TJ and we put together a short behind the scenes video from the separate footage that TJ shot.

Here is the behind the scenes:

And here is the final rendition of the video: