In the above video I’m demonstrating the moeller exercise as written in the PDF using matched grip. I like to call this traditional Moeller because of the utilization of the pinky and ring finger grip (Sanford Moeller’s preferred grip) as well as the forearm rotation.

In Sanford Moeller’s book “The Moeller Book” he describes just three strokes–down stroke, up stroke, and the single stroke–which we now call taps. Notice in the video at the very slow tempo the down strokes and up strokes are almost identical movements. Both are similar wavelike movements. Actually, the only difference between the two is the stick makes contact with the head during the up stroke; the downstroke gets close to the head but does not make contact.

Forearm rotation was a key element in the snare drum technique that Jim Chapin and Sanford Moeller taught. I initially learned Moeller in matched grip but without the forearm rotation. Around a decade later, when I studied with Jim Chapin I realized what I was doing wasn’t actually what Sanford Moeller taught. My wrists, arms and especially shoulders were all working harder than they had to. I realized that whipping a downstroke using forearm rotation reduced my shoulder joint stress (I’ll expand more on that in a future video post).

In the video the forearm rotation is easy to see at the slow tempo. It’s still there at the faster tempo but it’s a smaller movement-like flicking water off your fingers.

If your a drummer that’s experiencing muscle overuse issues or curious about incorporating this forearm rotation into your technique feel free to download the PDF above to get started.

I’ve been focusing on stick control with a few dedicated students so I thought why not make a video of some of the exercises? The video above shows two exercises. The first version of the exercise is a Moeller Hybrid because it uses techniques popularized by both Sanford (Gus) Moeller and George Lawrence Stone. The quarter notes are played using a variation of Moeller’s little finger grip. Just grip the stick toward the butt end with your pinky and form a loose fist with your remaining fingers. 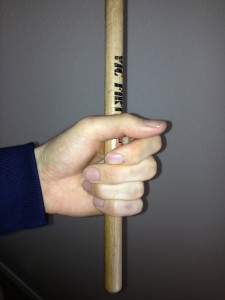 The purpose of this practice grip is to make it easier to feel the stick’s rebound as a jolt of electricity–not for playing the kit. I’ve been using this grip with full strokes to help students internalize their stick-rebound timing with forearm rotation.  The rest of the exercise is played with a middle finger fulcrum grip that utilizes the pull out/whip without forearm rotation, which is why I call it a Moeller-Hybrid.

The second version is the same exercise but uses open/close technique (also known as push/pull). This technique was popularized by Billy Gladstone and more recently by Gordy Knudtson. Both exercises were played in matched grip with slightly exaggerated movements. 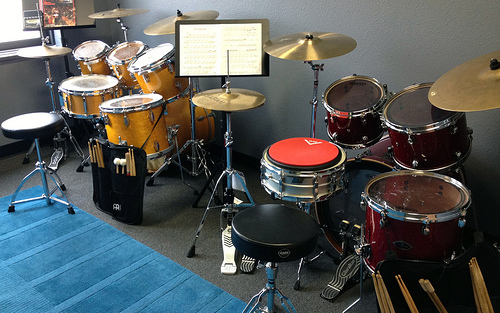 I am now accepting drum students for my new teaching space in Santa Ana, CA. The room is equipped with two full size professional drum sets, sound system and other teaching and learning goodies. Check out my lessons page for more info! 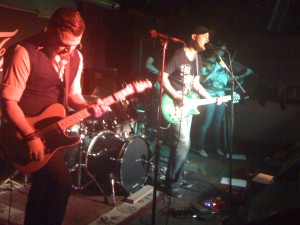 Depending on your performance, a live gig can either be bliss or torture. Some nights we are just “in the zone” and other times nothing seems to go right.  As musicians, we know there are lots of external variables that can lead you in either direction–quality of sound system, being able to hear yourself, drunk sound engineer, etc. Although some of these variables might be out of our control, here are a few tips that can help keep us in the zone.

1. Multiple full band rehearsals. In big cities, where rehearsal spaces are overpriced and empty beer cans are the main ambiance, it’s no wonder we try to skimp rehearsals. As a general rule for bands that play original material, I like to have no less than three full band rehearsals with the material and set list being established before the first rehearsal. If you’re working on new material I recommend you allocate separate rehearsal time for that. For a Changing Modes show, we usually allocate three or four rehearsals for new material and then another three or so with the set-list. If you’re a singer-songwriter working with hired pros the rule of three might be challenging but well worth the effort. Try to book the rehearsals as close to the gig as possible.

2. Allocate time to focus/meditate the day of the gig. If you’re not on tour and are playing at home be prepared to have many distractions–family, pets, girlfriends, boyfriends, internet, video games, etc.. It’s important to relax well before the show. Shut down the phone, turn off the computer and relax. Visualize the performance and the challenge that lies ahead.

3. Always ask for a sound check. Some venues will offer them and others won’t. Sound checks are mandatory in most upscale venues and if you are playing one you should prepare a stage plot. However, if you’re playing dives sound checks might be harder to come by. As another rule of thumb, no matter what level the venue is, always ask for a sound check. If they won’t agree to it request a line check (checking output on all cables). Some venues will only sound check the first band, while other venues ask for money. Since every stage (or dive bar) sounds different, acclimating before the show is vital and is worth the investment.

4. Making sure it sounds good on stage (more vocals in the monitors please.) Your band will sound different during performance time than it did during sound check. It’s good practice to make sure everyone is comfortable after playing the first song. Spending the time to tweak the stage sound after the first song is a necessary evil.

5. Making sure it sounds good in the audience. Too many times bands sound amazing on stage but the audience hears something very different. This is why pro bands tour with their own sound engineer (and some with their own sound systems). Until you get to that level, allocate someone to actively listen in the audience and give them authority to manage the sound engineer. Choosing this someone might be a little challenging since they should know your sound and have good ears. A musician friend or someone that has a vested interest in your music are both good choices.

6. Engage the Audience. With the exception of Shoegazers

, engaging the audience should be considered part of your performance. Guitar players that are fronting the band should practice tuning and speaking to the audience simultaneously. If you are not quick on your feet, then you might want to think about speaking content beforehand. If you are playing a local show, try to engage the entire audience, rather than just your friends.

7. Go with the Flow. Live performances are never perfect. You never know if someone will break a guitar string, forget lyrics, or count off the wrong song. Your job as an entertainer is to just go with the flow. Inhibit reacting negatively to anything that could throw you off.  It’s better to react as if you were expecting it. Think of these flubs as opportunities to connect with the audience.

8. Tell people who you are. There will always be people in the audience that don’t know anything about the band. Share some info with the audience. You can break the glass by sharing a personal story that involves the band members.

9. Work the room. NOW’s the time to mingle with the audience and try to get as many people to sign up on the mailing list. It’s a great opportunity for you to network, get feedback, and get fans.

10. Tip the Sound guy. Depending on the venue it might be a good idea to tip the engineer. Some venues  allocate money from the door for this purpose, so make sure you ask first. If the engineer exceeded your expectations than you can still give him/her something. Five or ten bucks is still better than nothing and they will remember you for it.